What is a Tillandsia?

Tillandsia refers to a huge family of epiphytes (plants which live on the surface of other plants) that originates mainly from the Mesoamerica region. Tillandsias are often known as Air Plants because most, if not all plants in this family do not require soils to survive! A Tillandsia will wilt away if planted in soils/substrates.

In the wild, Tillandsias are often found growing on the branches or barks of other trees, similar to Orchids. Unlike common houseplants that absorb water and nutrients from their root, Tillandsias are capable of absorbing moisture and nutrients directly through their leaves. Certain Tilansia species will still develop roots, however, these roots are meant to be anchors for the Tillandsias to attach themselves to other plants. It is commonly believed that Tillandsias do not grow on the ground surface, yet it is worth noting that there are reports of an isolated colony of Tillandsias growing on the desert's surface in the Peruvian-Chilean desert (Galán de Mera, Hagen, & Vicente Orellana, 1999). ​ 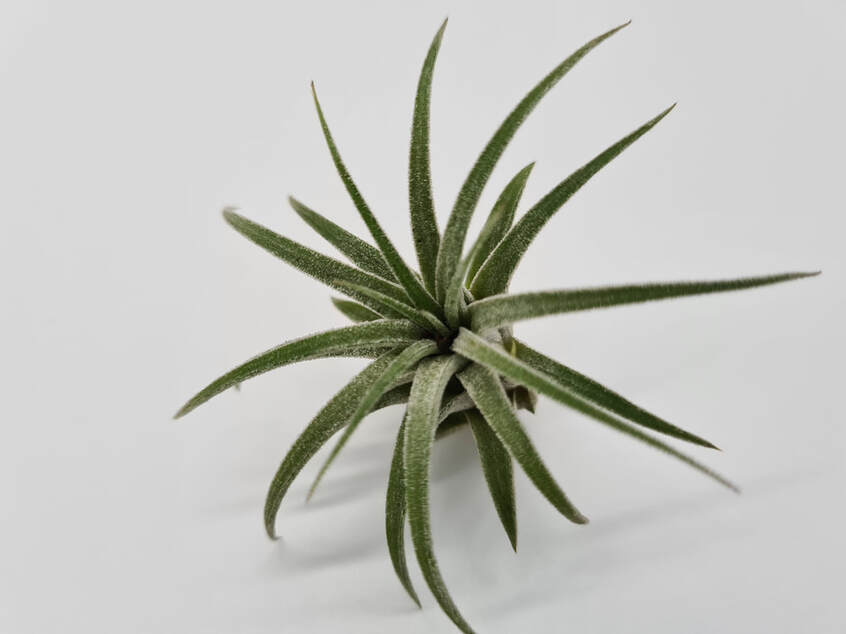 At first glance, one might mistake a Tillandsia for a pineapple's crown (the leaves on top of a pineapple). The thin and long leaves of the Tillandsia form a rosette shape with a funnel at the bottom. When in dry condition, the leaves will appear dark green and slightly silverly. These leaves will turn bright green when they are moist. According to research done on Tillandsias, these leaves consist of specialized hydrophilic cells known as trichomes (Mendoza et al., 2017). It allows Tilandisas to absorb water rapidly through their leaves. There are over 650 species in the Tillandsia family, most have similar appearances. Matured Tillandsias are known to produce bright colour flowers meant to attract pollinators.​ 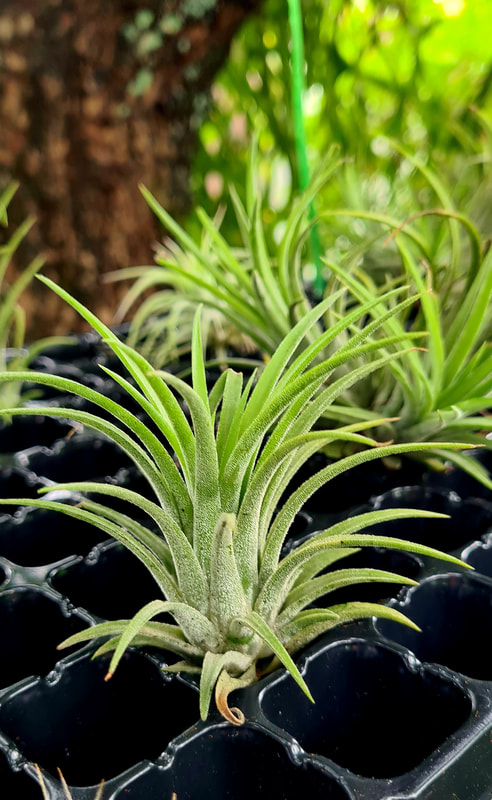 How to Take Care of A Tillandsia

Light & Temperature
Tillandsias are hardy plants that can survive in most environments, be it indoors or outdoors. Ensure that there's sufficient light available and avoid strong direct sunlight (e.g. noon's sunlight). Strong/Excessive light and high temperature will cause the Tillandsia to dry rapidly, this may lead to wilting if water was not replenished in time. Hence, plant shades are highly recommended for owners that keep their Tillandsias outdoor. Good airflow is also beneficial for Tillandsias. ​

Tillandsias can thrive in temperatures in the range of 10 to 32 degrees Celcius. Hence, it can be kept inside the house/office or outdoor (under shades).

Watering
Watering for Tillandsias can be done by misting using a water sprayer once a day. Alternatively, watering can be done by soaking the whole Tillandsia in water for an hour once or twice every week. We find that soaking the Tillandsias twice-weekly works better than misting them daily. If Tillandsia's leaves began to turn brown and brittle, it is likely a sign of under-watering. In this case, owners should increase the frequency of misting/soaking. However, avoid overwatering as it may lead to rotting of the leaves or stems. If watering is done by soaking, please ensure that the plant is fully dried within an hour after removing it from the water.

​1. What is the growth rate of a Tillandsia?

In general, Tillandsia grows a few inches annually. Small Tillandsias like those sold in our store can be expected to double in size within a year if given good care.

​​2. How often should Tillandsia be watered?

As aforementioned in the article, we recommend soaking the whole Tillandsia in water for an hour once or twice every week. Increase the frequency as needed if you noticed your Tillandsia looks under-watered (brittle leaves and dehydrated).

​​3. What kind of substrates/potting mix should I use to keep Tillandsia?

Substrates are not needed for this plant.

4. What type of pot should I use to keep Tillandsia?

It is advisable to mount your Tillandsia on a holder rather than a usual pot. This is to ensure maximum ventilation, which is crucial for the survival of Tillandsia.

5. Is it possible to propagate the Tillandsia?

It is possible to propagate the Tillandsia. If given good care, the mother plant will start producing plant pups at the side, which can be separated into new Tillandsias.